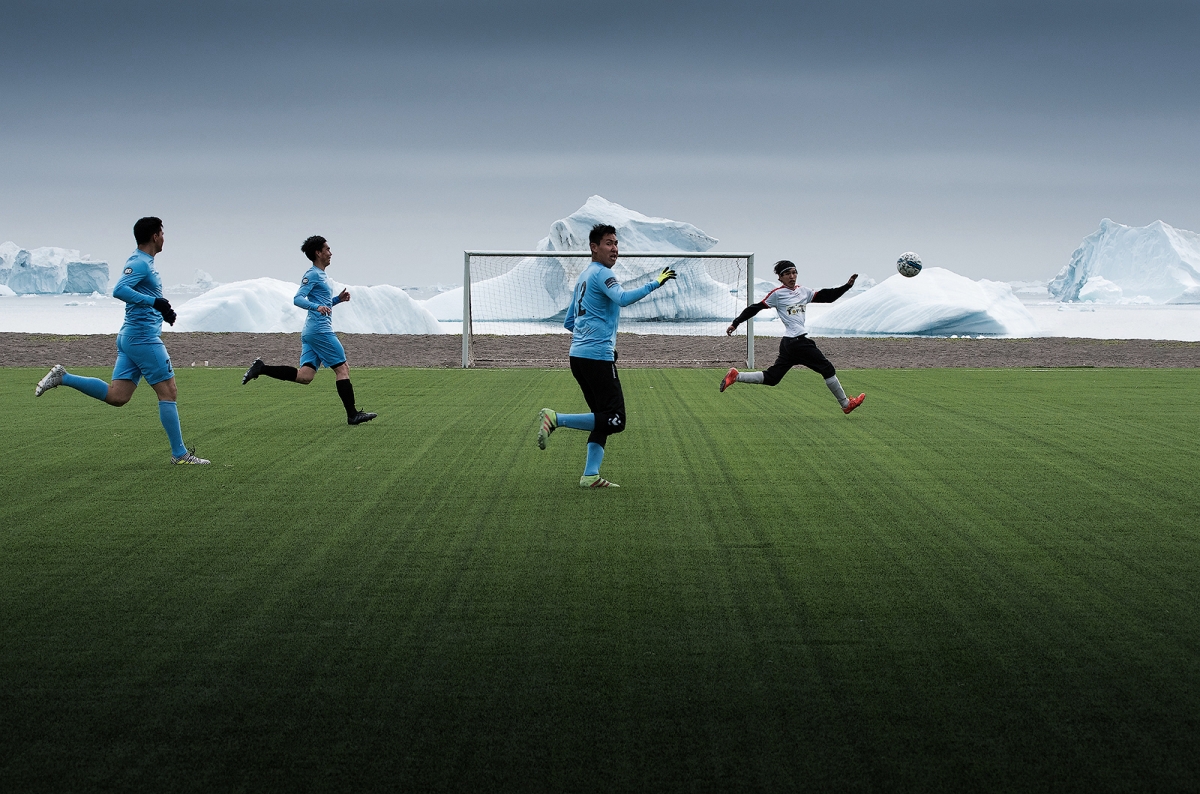 What can't be photographed in Greenland...

Dear friends! We have returned from a mind-blowing trip to West Greenland and want to share pictures and some facts about this wonderful place. The facts are interesting and you won't be bored to read it.

Geographically, this country belongs to North America, but politically it is considered a self-governing province of Denmark. Although Greenland is 50 times larger than Denmark, the number of inhabitants of the island does not exceed the population of a small town. The reason for this is the cold — most of the island is covered with a layer of ice almost 3 km thick. 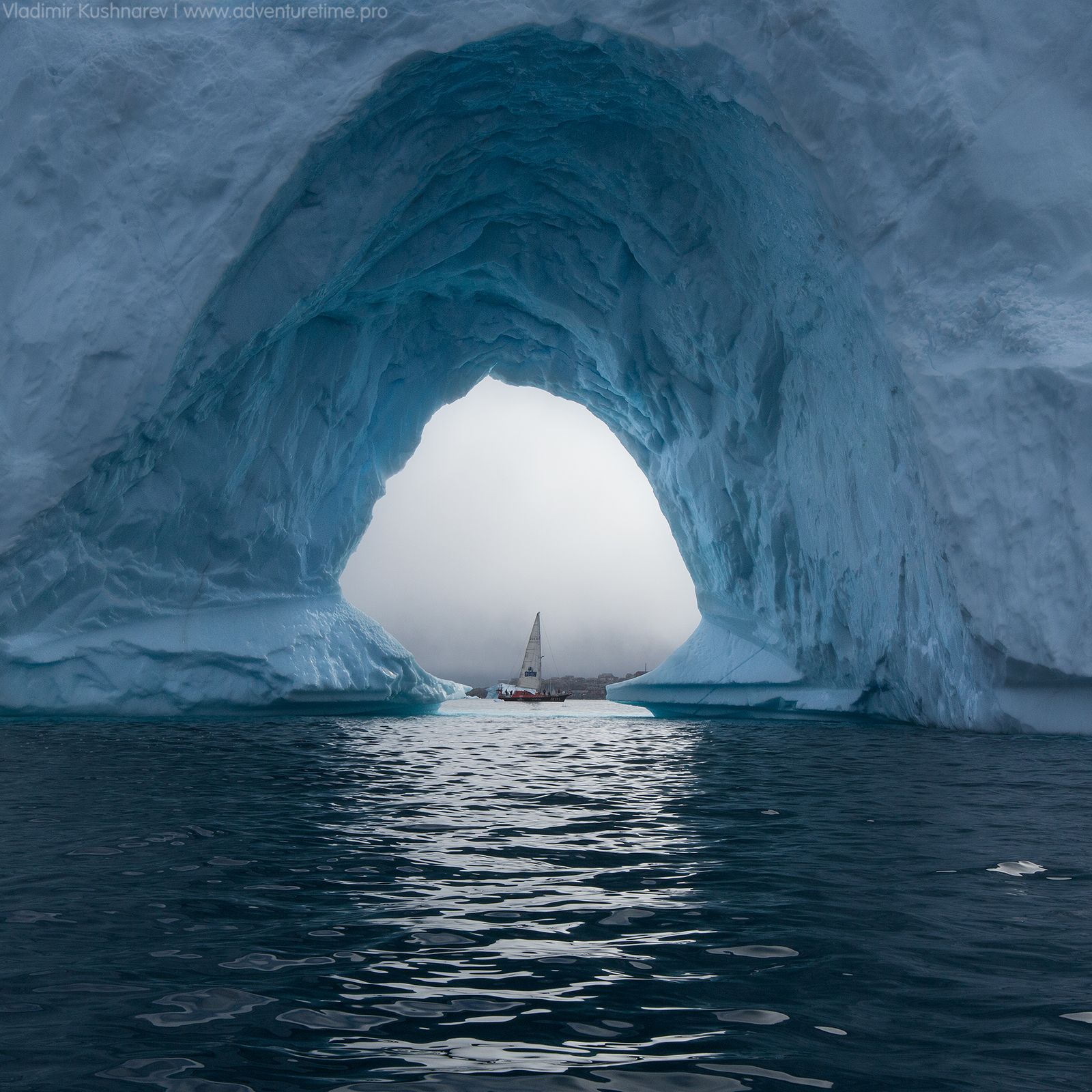 The population of Greenland is only 56,000 people which gives a population density of 0.027 people/km2.

Almost all residents live on the south-west coast, on a narrow coastal strip between the ice shield and the sea because the climate is milder there. The main peoples in Greenland are the Greenlandic Eskimos (in the local language, Inuits), who make up about 90% of the total population. The remaining 10% are mainly Danes and other Europeans.

The Eskimos were the first people to settle in Greenland. Around 985 A. D. Vikings from Norway and Iceland arrived here and named this ice-covered island Greenland ("a green land"), in order to attract more settlers.

Europeans call the locals Eskimos which is not quite true — the term "eskimo" ("raw food eater") was born in the languages of Indian tribes of North America and gradually began to be used to refer to the Inuit tribes of the continental part of the United States and Canada to which the inhabitants of Greenland do not belong. 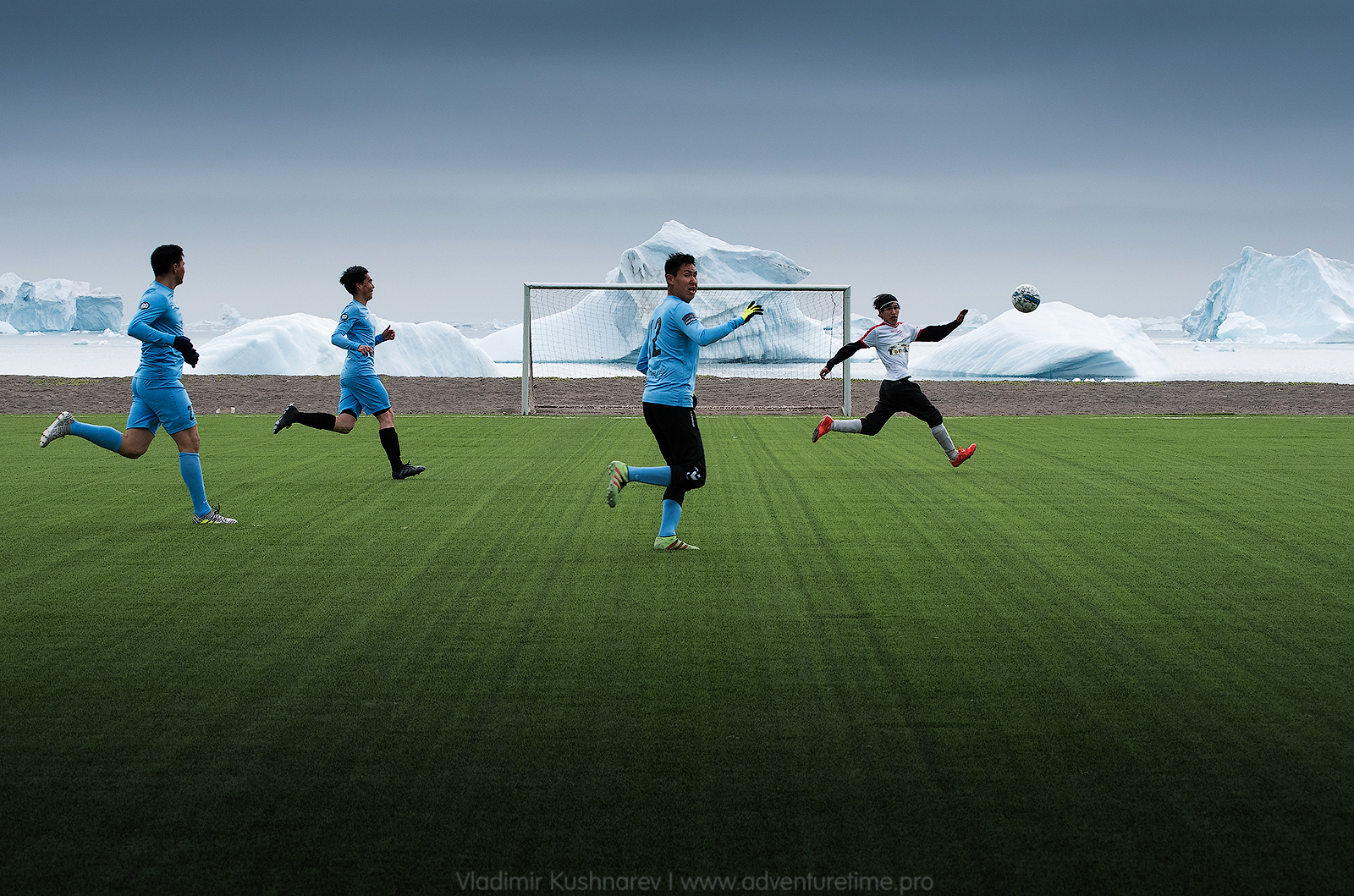 The emblem of Greenland is an image of a polar bear on a blue shield. The blue colour represents the geographical position of Greenland (between the two oceans), and the polar bear, being one of the symbols of the island, characterizes the fauna of Greenland.

If the ice of Greenland melted completely, the world sea level would rise by 7 meters. 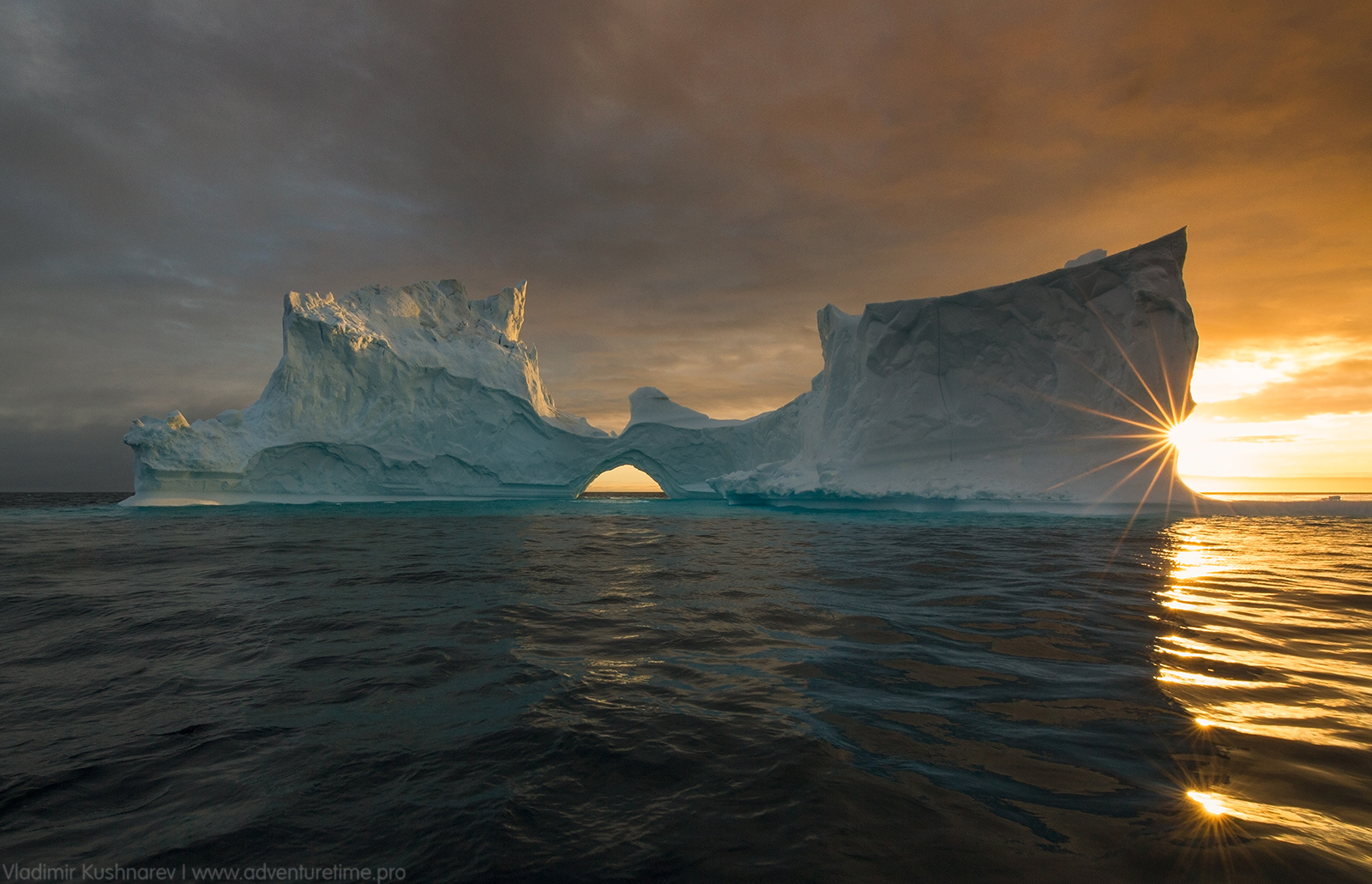 England together with Scotland and Wales, France, Italy, Holland, Belgium and Norway could accommodate on the territory of Greenland.

The ice shell covering Greenland is one and a half thousand metres thick on average.

The level of prices on the island is quite high. Greenland provides itself independently only with fish and seafood, as well as some meat products — everything else has to be imported, which naturally affects the prices. Even compared with far from cheap Scandinavian countries, prices here are about 10% higher, and alcohol, tobacco, dairy products, vegetable oil and also fresh fruit and vegetables are more expensive by 14-20%. At the same time, the range of products in stores is not smaller than in any of European countries. You’ll be surprised if you want to buy potatoes or fruit in a shop — they are not sold by weight but by piece. 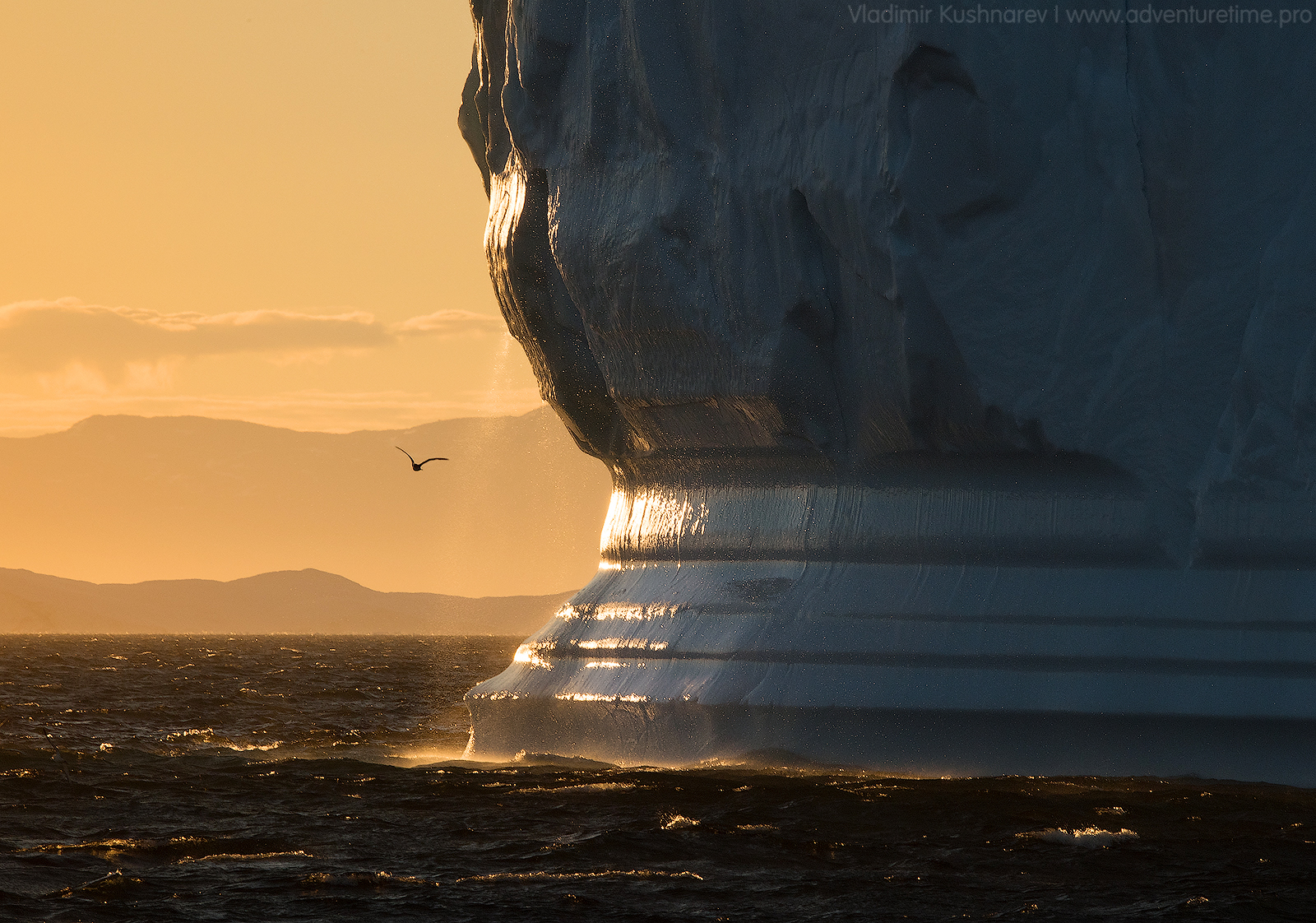 To the west of the town of Ilulissat, 300 km north of the Arctic circle and 600 km north of the capital, the waters of the Disco Bay are splashing — the bay which is perhaps the most famous in Greenland. This is a real "land of icebergs": up to a thousand ice mountains of all sizes are constantly cruising along the surface of the bay, as coastal glaciers are sliding into the sea at a speed of up to 30 metres per day which gives up to 7 million tons of ice every day! This enchanting picture, only amplified by the sun for which there is no sunset in the summer time in this land makes the Disco Bay and five towns placed on its coast one of the most beautiful places of the planet.

Also, the fastest moving glacier in the world, Jakobshavn, moving at a speed of about 30 metres per day, is located in Greenland.

Not many things are forbidden in the country: to take photographs in churches during services and also to photograph local residents without their consent, to fish without a license and to litter. There are rifled carbines of all famous world brands in closed shelves in stores, next to food and mops. You only need your passport to buy such a "souvenir". 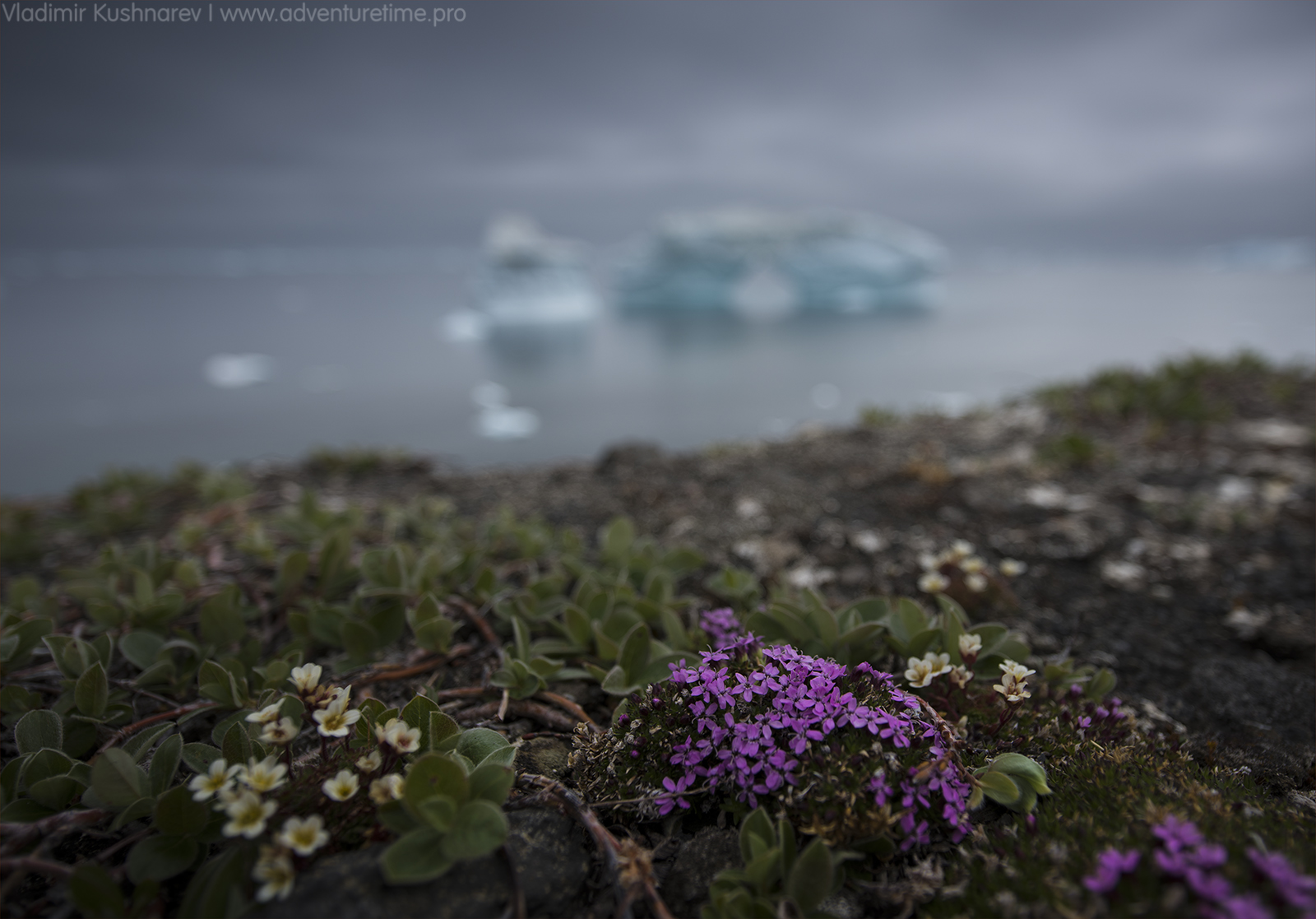 In Greenland there are no highways or railways between towns. Therefore, you can get from one end of the island to the other either by water or by air. Nearby towns and villages are connected by snowmobiles and dog sleds.

Souvenirs from Greenland are unique works of art: they are not produced in China, or created following the same pattern; they are handmade by local craftsmen, and that is why they are quite expensive. The most popular souvenir is a tupilak figure (“tupilak” means "a spirit" according to the local believes).

Jewelry made from local stones is also popular. For example, tugtupit, which is characterized by rich pink or purple, is born in the only place on Earth — the town of Narsak, in southern Greenland. Jewelry made of stones called nuummit (shining dark brown) and grønlanditten (fresh green) looks especially beautiful. When purchasing a nice bracelet or a necklace, ask the salesman to issue a CITES certificate that will allow you to take the jewelry out of Greenland.

As horrible as it sounds, traditional Greenland cuisine means almost no cooking of food. If it is whale skin with a layer of fat (a delicacy called "mattak"), they eat it raw, straight from the animal, just cut off – sorry for that one... Of course, extreme travellers will easily find restaurants offering some national dishes. The delicacy of national cuisine is a mixture of partridge shit with seal fat... A dish which is cooked from narwhal fat, water, walrus brains and fermented grass extracted from the first stomach of the reindeer is quite popular in these places.

Popular drinks are black tea and tea with milk (which often replaces the first course of the meal, with added fat, salt and spices), deer milk, "caffemik" — a special Greenland coffee drink which is made from coffee, sugar and three types of alcohol with whipped cream (often it is also set on fire when served). 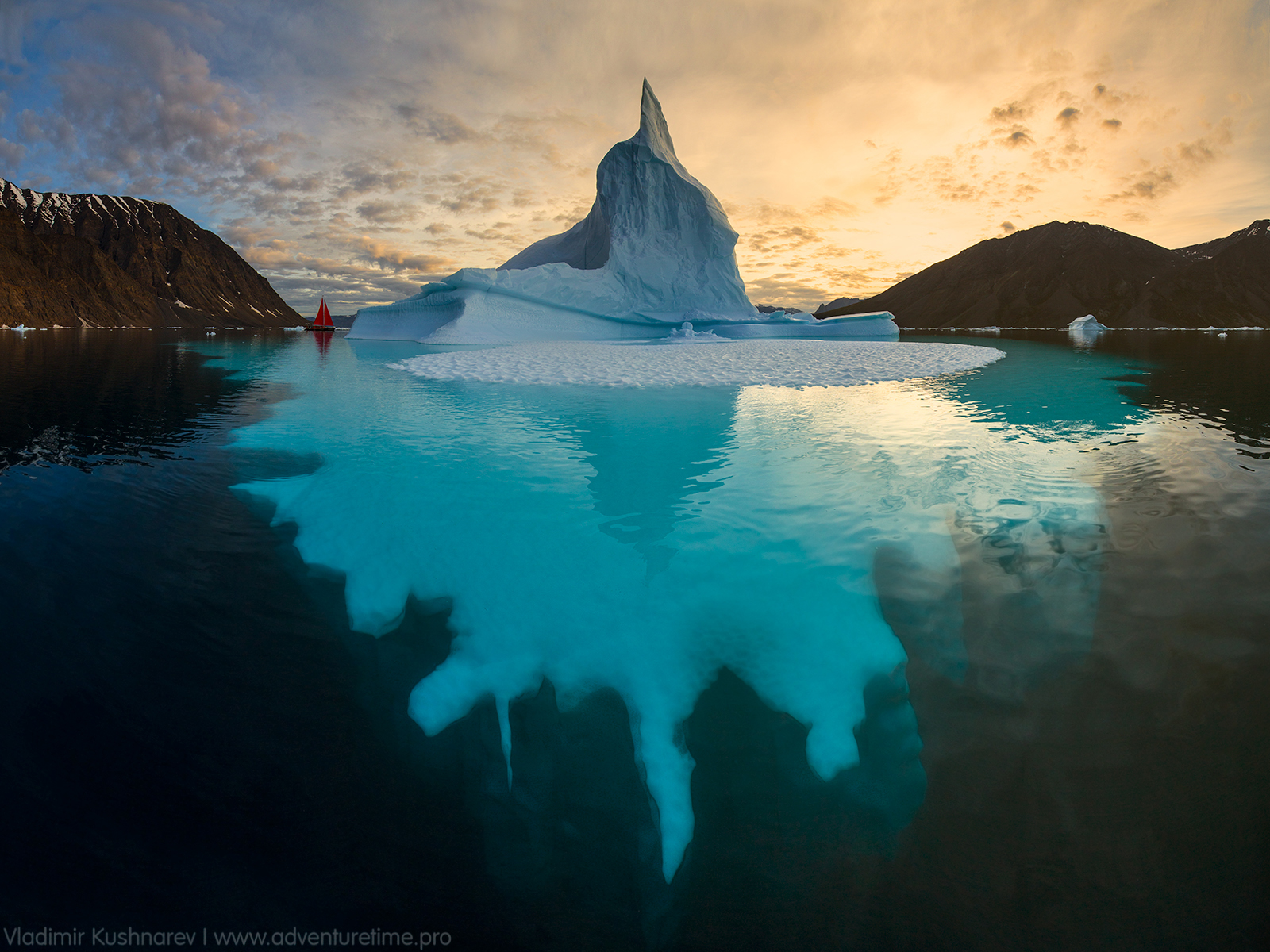 Currently, Greenland remains one of the few places on the planet that is not affected by human activities, a place of fantastic opportunities for extreme sports and recreation, as well as for eco-tourism. The vast tundra, the picturesque coast with its fjords and pristine beaches, the monstrous glaciers that "give birth" to icebergs right before your eyes, the silent Inuits with their unique culture and fantastic adaptability to the most severe local conditions — all these things are constantly attracting more and more tourists.

Now you know just enough about Greenland to feel a genuine itch and an insatiable desire to visit this wonderful and untouched by civilization country.

And we won't mind if you choose the team of ADVENTURETIME.PRO to do it.

See you on the Green Island!

We have created a chat in Telegram for you, in which we are going to publish all current information about our new routes, hot deals,  discounts and other special terms. Subscribe to our channel and you will definitely never miss our most pleasant offers.

To subscribe to the channel, you need to install Telegram App on your device or desktop computer.